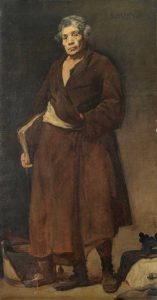 This was one of three canvases produced under the terms of Longstaff’s 1887 scholarship. In 1890, he spent three months in Spain making a special study of the art of Velazquez, widely admired by many in the second half of the 19th century.

The Spanish painter’s Aesop (Madrid, Prado, c.1640), also copied by John Singer Sargent in 1879, has been described as showing the ancient Greek writer as “a pricker of the pretensions of philosophers.” Velazquez’s proto-modern approach in this work and its companion Menippus cast everyday models in the roles of philosophers.

For Longstaff’s stint in Spain in 1890, see http://adb.anu.edu.au/biography/longstaff-sir-john-campbell-7230 (by Leigh Astbury; ADB vol.10, 1986). For Velazquez’s painting, see Nicholas Tromans, “The iconography of Velázquez’s Aesop,” Journal of the Warburg and Courtauld Institutes, vol.lix, 1996, pp.332-37 (with further references; also discussing Menippus, also in the Prado); the quote about Aesop is from p.336. For Sargent’s oil copy of the head of Velazquez’s figure (Ackland Art Museum, The University of North Carolina at Chapel Hill), see e.g. http://jssgallery.org/Paintings/Head_of_Aesop_Copy_after_Velazquez.htm