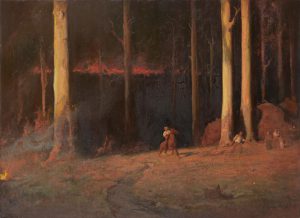 Painted soon after Longstaff returned to Melbourne from his Travelling Scholarship travels, this work demonstrated his early ambition and talent, applied here to a contemporary and local subject, the climax of the bushfires that ravaged the Victorian region of Gippsland in the summer of 1897-98 (on “Red Tuesday”).

The artist visited the area, made detailed preparatory studies, and exhibited the finished canvas, dramatically lit, in his studio in August 1898. It was subsequently purchased for the NGV with the aid of a government grant.

John McDonald (2008) speculates that the paint surface is so badly cracked that it seems like a deliberate attempt to simulate the effect of the heat of the fires; however, McDonald also notes that similar problems appear in other works by the artist: see e.g. Longstaff after Titian Entombment of Christ {1889} NGV [PA].