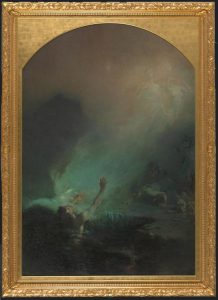 Longstaff fulfilled his scholarship obligations with two copies (see separate entries) and this classic salon painting, a huge, dark, fin-de-siècle fantasy, shown to acclaim at both the Paris Salon in 1892 and the Royal Academy in 1893.

Elena Taylor (2013) observes that the success of this work effectively put an end to the “fleeting moment of Impressionism” apparent in Longstaff’s art and taste during his preceding few years in France (for further comments along these lines, see linked artist entry).

For a far less Wagnerian interpretation of the Homeric story, painted the year before, see Waterhouse Ulysses and the Sirens 1891 {1891} NGV [PA].

The stock-book entry notes the date of acquisition as Nov.1894, and values the painting at £450. See also Gates (ed.), re:Creation / Re-creation (1989), for further discussion of Longstaff and the Travelling Scholarship; and Taylor Australian Impressionists in France (2013), esp.pp.39-40 (quoted above)