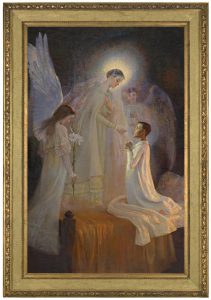 This large-scale religious composition, shown at the Paris Salon in 1901, was acquired for the substantial sum of £350.

The subject, as explained in NGV 1905, is St Barbara, with angels, giving the sacrament to the ailing Polish Jesuit youth Stanislaus Kotka (1550-68), a popular saint who was beatified in 1605, and canonized in 1726.

The NGV catalogue entry includes information on the frame, manufactured in Melbourne by John Thallon in 1899, and restored in 1995