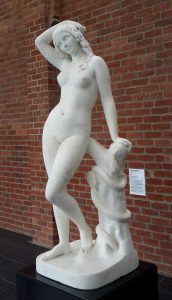 The Irish-born sculptor – whose surname is also spelt McDowell in some sources – led a successful career in England, becoming a member of the Royal Academy in 1846. He is probably best known for the “Europe” group on the Albert Memorial (1865-70).

This is one of several known variants of MacDowell’s statue of Eve shown at the Great Exhibition in 1851 (now in the V&A Museum). The Bendigo Art Gallery notes that a similar statue by MacDowell, also dated 1851, is held in the Bethnal Green Museum in England.

According to NGV 1905, the present variant was selected by Redmond Barry in London in October 1877, apparently to serve as a pendant to Marshall Wood’s similarly-posed Daphne, purchased in Melbourne the month before: see * Wood Daphne 1871 {1877} Bendigo [SC]. The two statues were subsequently exhibited and catalogued as a pair, and then consigned together to Bendigo in 1943.

Many thanks to Peter Hutchinson, who has made a particular study of the sculpture of this period, for forwarding (Feb.2017) photographs of the present work (as shown here), and the Bethnal Green Eve; the Bendigo Gallery note that the latter figure dates from 1851. For the marble Eve in the V&A (1850), see http://collections.vam.ac.uk/item/O66223/eve-statue-macdowell-patrick/ (accessed 26/10/2018). For the artist, see also AKL 86 (2015), pp.141-42 (entry by P.Murphy); not listed in Bénézit. There is an early stereograph photo of the present work in the NGV by Boake  (SLV acc.no. H82.261/20): the SLV catalogue incorrectly identifies the statue shown as attributed to Canova, apparently confusing this work with * Canova (attrib.) Eve {1885} Loc? [SC]