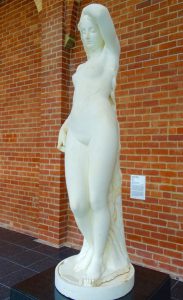 NGV 1905 indicates that this statue was purchased in Melbourne. * MacDowell Eve {1877} Bendigo [SC], bought in London the following month, seems to have been intended as a pendant. In NGV 1894, the two works were catalogued together, and reproduced opposite one another, emphasizing their answering poses. In February 1943, they were both de-accessioned and presented to Bendigo.

Like a number of his contemporaries, Wood often produced multiples of his own statues. This figure, described as a replica in NGV 1905, may have been modelled on or identical with an unfinished Daphne exhibited by Wood at the Royal Academy in 1859, and/or another shown at the Great London Exposition of 1862. A smaller variant, only 95.2 cm high, signed and dated 1859, appeared at auction in London in March 2015.

The present statue was apparently shown in the Melbourne International Exhibition of 1880-1, while Wood was completing his statue of Queen Victoria for Parliament House, Melbourne (for details, see separate artist entry).

Many thanks to Peter Hutchinson for providing information and photographs of this work (Feb.2017)

For an engraving of the Daphne shown in 1862, see http://www.alamy.com/stock-photo-daphne-marble-statue-by-marshall-wood-the-international-exhibition-53476481.html.l. For the smaller Daphne auctioned by Woolley & Wallis, London, 25 March 2015, lot 397, see http://www.the-saleroom.com/en-gb/auction-catalogues/woolley-and-wallis/catalogue-id-srwo10060/lot-3f515f15-c4b9-48f6-8d8c-a45000a44e19 (illustrated; noting the provenance as “the property of a nobleman,” and also mentioning the version shown at the RA in 1859)