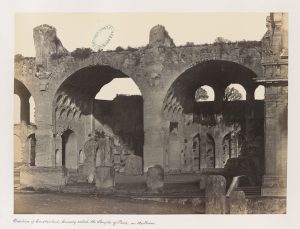 Macpherson moved to Rome in 1840, working initially as a painter and art dealer. During this period, he discovered Michelangelo’s unfinished Entombment, which he later sold to the London National Gallery.

He began taking photographs in 1851, and was particularly prolific and successful during the 1860s, also publishing a separate album of photographs of the Vatican sculpture collection in 1863. The present series was published by the Architectural Photographic Association, London (see also Fenton & others, Cathedral and Abbeys in England and Scotland {1860} SLV [PH]).

This collection covers both ancient and more recent buildings in Rome, and other sites in the region (Tivoli, Orvieto etc.).

See SLV online catalogue (listed by individual acquisition no.); e.g. for the photo reproduced above, see http://search.slv.vic.gov.au/permalink/f/cjahgv/SLV_VOYAGER2837320. For the collection, see also Galbally & others, The First Collections (1992), p.78, cat.no.64

For the photographer, see http://en.wikipedia.org/wiki/Robert_Turnbull_Macpherson, an informative and well-researched article, citing various references, including Alistair Crawford, “Robert Macpherson 1814–72, The Foremost Photographer of Rome”, in Papers of the British School at Rome, Vol. 67 (1999), pp. 353–403; Marjorie Munsterberg, “A Biographical Sketch of Robert Macpherson”, Art Bulletin, Vol. 68, No. 1 (March 1986), pp. 142–153; and David Wooters, “The Quiet Art of Robert Macpherson: An Explication”, in History of Photography, Vol. 20 (Spring, 1996), pp. 2–3