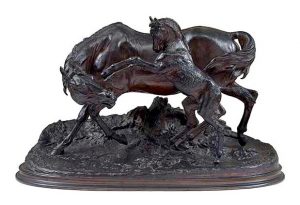 This bronze, signed “P.J.Mene,” was purchased from the International Exhibition held in Melbourne in 1881, together with * Mêne The Hawker {1881} Loc? [SC]. Both works were de-accessioned during the early 1940s purge of 19th-century sculpture from the Melbourne collection, the other work being sold at auction.

Bénézit notes that another statuette by Mêne of a mare and her foal was sold at auction in Chartres in 1973.

The Geelong Gallery’s online catalogue includes the photograph and details shown above; many thanks to Geoffrey Edwards for his assistance in clarifying the work’s history (email correspondence, March 2020). This sculpture is also listed in NGV 1923, cat.VIII.21