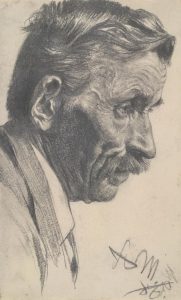 Menzel (the “von” was added after he ascended to the nobility late in life), also known as Adolph, was a prolific realist artist whose skills are exemplified here. He was best known in his day for his detailed pictorial representations of the court of Frederick the Great and other aspects of Prussian history.

He was also sensitive to the nuances of light and texture, leading some contemporaries to argue that he prefigured French Impressionism. Degas, who knew Menzel, apparently called him “the greatest living master.”

Menzel was also an enthusiast for Keene’s graphic work.