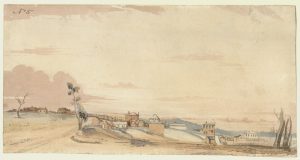 An inscription on the verso notes that the work was made for Fawkner, who presented it to the Melbourne collection in 1868 with several other sketches of early Melbourne by O’Brien and others (refer linked entries on both Fawkner and O’Brien). “No.5” is inscribed at the upper left.