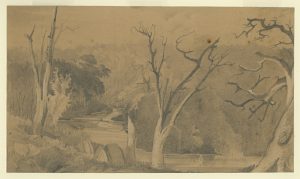 A number of O’Brien’s other early views of Melbourne, several also donated by Fawkner in 1868, are listed in the early NGV catalogues. The artist of this sketch is not named, but the SLV confidently lists it as O’Brien’s work.

This work presumably formed a pair with * O’Brien View at Mr Campbell’s {1868} Loc? [DR], also listed in NGV 1894 but apparently no longer extant.