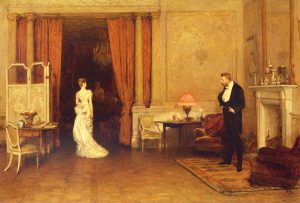 This classic late Victorian drawing-room scene survived the later cull of such period pieces. It was purchased in the year it was painted, for £2,750, the highest price paid for a work for the NGV, to that date.

One of several paintings in which Orchardson explored the theme of unhappy marriage, this canvas skilfully juxtaposes the silhouetted figures within the extensive interior, animated by lively paint-work. At the Royal Academy in 1887, it was accompanied by lines from Tennyson: “It is the little rift within the lute / That by-and-by will make the music mute.”

As noted in NGV 1905, Sir Henry Tate presented a smaller replica, also dated 1887, to the Tate Gallery (now Tate Britain) in 1894. The artist lived in London for much of his successful career, and was knighted three years before his death.

Francis Fowle’s entry on the Tate Britain version (http://www.tate.org.uk/art/artworks/orchardson-the-first-cloud-n01520/text-summary, dated October 2000), suggests that Orchardson’s main concern was to warn against marrying for wealth rather than love, noting the artist’s other paintings on comparable subjects (in Glasgow and Aberdeen, from 1883 and 1886), the Tennyson poem (as quoted above), and other relevant references. For the artist, see also Bénézit 10, pp.634-35 (listing the London painting but not the present work) and AKL 93 (2017), pp.434-35