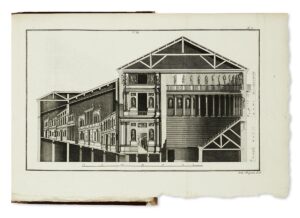 Palladio, the most famous son of Vicenza in Northern Italy, adapted classical architectural style, especially the pedimented temple front, for the design of Italian country houses and other public buildings, both in Venice and the Veneto region. His legacy was continued by Vincenzo Scamozzi (1548-1616), who completed the famous Teatro Olimpico.

The present volumes were compiled by Ottavio Bertotti Scamozzi (1719-90), a Vicenza architect who added Scamozzi’s name to his own, and was a key figure in the 18th-century Palladian revival. The engravings, by Gaetano Testolini (active 1760-1811) and others, modify Palladio’s own published designs through reference to the completed buildings. The companion volume comprises engravings based on Palladio’s studies of Roman Baths (of Caracalla etc.), which inspired various details in his own architecture, notably the “thermal window.”