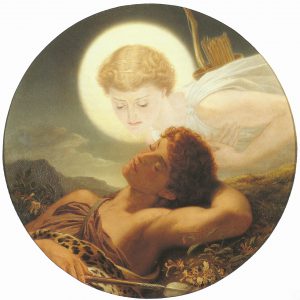 The 1894 and 1905 NGV catalogues both identify the subject of this painting as the Greek legend of Endymion and Selene. NGV 1894 also quotes lines from a poem on the legend by Alex Anderson, and provides further details on the artist, the brother of Waller Hugh Paton.

The reproduction shown here appears on several internet sites, but with vague details as to the present location of the work. One of these sites adds that the painting was shown at the Royal Scottish Academy in 1880, and that Paton modelled the sleeping figure of Endymion on his son Frederick (1861-1914), who later became a noted illustrator.

See also NGV Annual Report for 1929 (available online), p.16: as on loan to the Ballarat High School. For the work shown here, see http://my-museum-of-art.blogspot.com.au/2012/11/joseph-noel-paton-dream-of-latmos.html; see also  https://www.flickr.com/photos/sofi01/5926895916/ (also quoting the lines from Anderson, and providing other details, but not the location of the work)