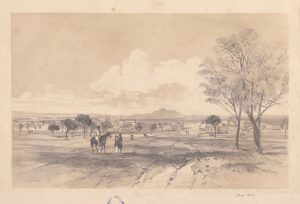 The prints in this set, made during a 3-month stay in Victoria, and published in Hobart in 1847, show: Melbourne from Collingwood; Vale of Heidelberg near Melbourne; Elizabeth Street, Melbourne; View from Batman’s Hill Melbourne; Corio Bay from the Barabool Hills; and Geelong 1847.

For details, refer SLV catalogue; and for another set, held in Canberra, see https://catalogue.nla.gov.au/Record/2944860