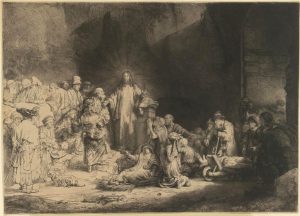 Rembrandt’s etchings, always highly regarded by knowledgeable artists and collectors, were simply the benchmark for the protagonists of the 19th and earlier 20th century “renaissance” of etching, including Seymour Haden, from whose collection these prints came (see Haden 12 etchings {1892} NGV [ET]).

These impressions, bought at the Haden auction in London in June 1891, were the costliest and most prestigious of the prints purchased for Melbourne on Herkomer’s advice, and they significantly increased the quality of Old Master works in the collection at that date.

Subsequent acquisitions have strengthened the NGV’s holdings of Rembrandt’s etchings considerably. But these works, described by Irena Zdanowicz (1993) as “an extremely fine and representative group,” laid a strong foundation. The 1639 Self-Portrait, one of several early impressions with added chalk amendments, revealing Rembrandt’s working process, is particularly notable (for a good reproduction, see Etchings – Introduction).

The most expensive etching in the group (at £178/10), was the so-called “Hundred Guilder Print” (reproduced above), a fine impression that preserves the burred effect of the original drypoint line, as do several other prints in the group. However, the prices paid in 1891 were all relatively small, by contrast with other NGV purchases of the same period (e.g. Alma-Tadema The Vintage Festival 1871 {1888} NGV [PA], bought for £4,000), and negligible when compared with the extremely high prices commanded by fine Rembrandt etchings today.