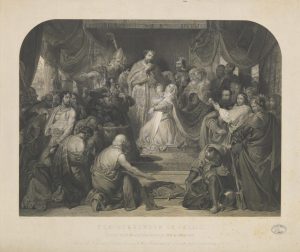 The inscription identifies the artists involved, and adds a sub-title: “Queen Philippa pleading for the Burgesses.” Philippa (c.1310/15-69) was  a French princess who married Edward III of England in 1328. In 1347, during the early stages of the Hundred Years’ War, she is said to have intervened to beg for the lives of the 6 principal burghers of Calais (later celebrated in Rodin’s famous bronze group of 1895).

This impression is in mediocre condition (foxed).

For the artists involved, see https://en.wikipedia.org/wiki/John_Henry_Robinson and https://en.wikipedia.org/wiki/Henry_Courtney_Selous; the latter is also listed in Bénézit 12, p.1332, under “Slous” (with biographical dates 1811-90, and the explanatory comment: “He exhibited at the Royal Academy under the name Slous from 1818 until 1831, and under the name of Selous from 1835 until 1885”)