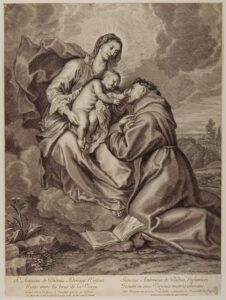 This was the only engraving of the 38 in Louis XIV’s Tableaux du roi series that was based on the work of a painter who was neither Italian nor French.

Rousselet’s print reproduces a canvas of c.1626-29, acquired by Louis XIV in 1671; it remained in the French royal collection until 1813, when it was sold by exchange to the Brera, Milan, its present location. The painting was commissioned for her Brussels chapel by Queen Isabella, the daughter of Philip II of Spain, and co-ruler of the Spanish Netherlands with her husband Albert from 1598 until he died in 1621. After joining a secular Franciscan order, she remained governor until her death in 1633.

St Anthony (1195-1231), Portuguese by birth, was an early adherent to the Franciscan rule, and was canonized in 1232. He spent his final years in Padua, and is venerated there, especially at Sant’Antonio (the ‘Santo’), where he is buried.


For van Dyck’s canvas, see Susan Barnes & others, Van Dyck: A Complete Catalogue of the Paintings, Paul Mellon Centre for Studies in British Art, 2004, cat.no.III.38 (providing the details noted above)