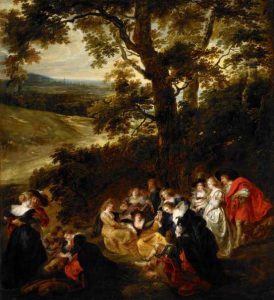 This large canvas, prominent in photographs of Felton’s own collection prior to 1904, was designated “attributed to Rubens” in 1905, and later “School of Rubens” (NGV 1948).

Hoff (1995) describes it as “after Rubens,” comparing a smaller original by Rubens in Waddesden Manor (c.1631), and suggesting a dating to the late 17th or early 18th century. Indications of provenance on the back suggest the painting passed through Spain en route to England. In 1995, Hoff reproduced it with discoloured varnish, but it has been cleaned since.

Felton’s work is prominently displayed in one of the photographs of his St Kilda rooms dating from 1902 (taken by Nicholas Caire): see Poynter Mr Felton’s Bequests (2003/2008), p.181