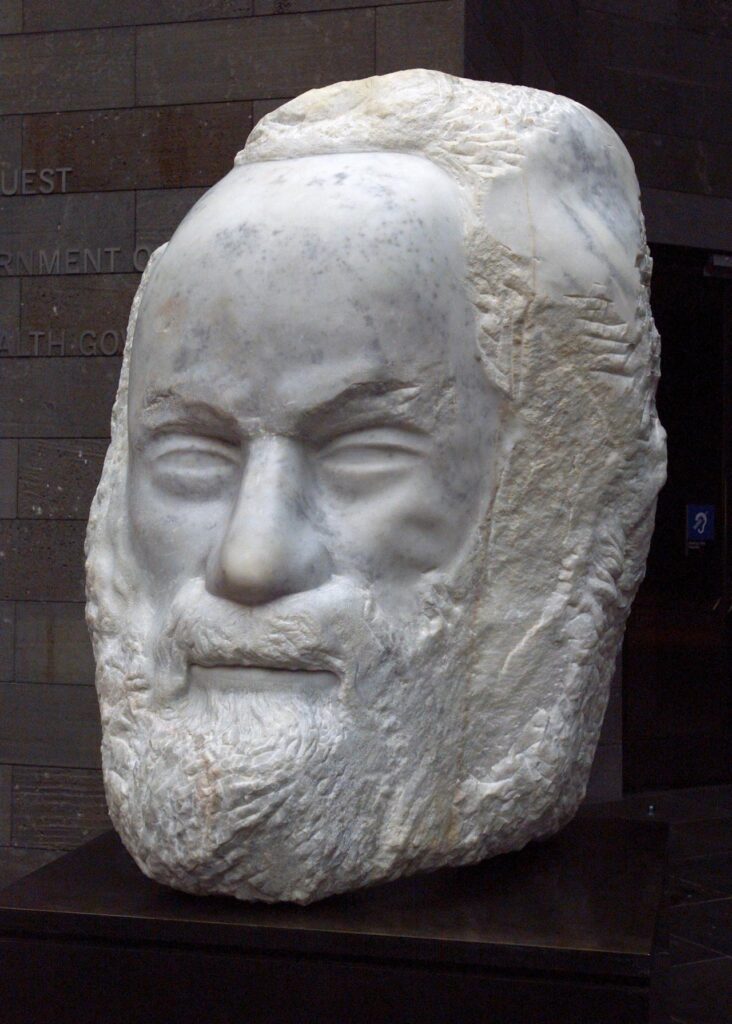 Born into a working class family (his father was a currier in Essex), Felton migrated to Victoria in 1853, and was first employed transporting supplies to the goldfields, before setting up as a merchant in Melbourne. In 1867 he joined forces with Frederick Grimwade in a wholesale drug business, and the company prospered and expanded, so much so that Felton’s estate was estimated to be worth about half a million pounds at his death.

While obviously highly active and energetic in the commercial realm, Felton also engaged in Victorian cultural life, and collected art in considerable quantities. He donated several works to local museums, perhaps most notably Eugene von Guérard’s Weatherboard Falls 1863, donated to the recently-established Geelong Gallery in 1900 (for details, see references below).

The only work he donated directly to the NGV, in 1892, was the Sea Idyll by Rupert Bunny, whose family he knew well. But Felton’s impact on the Melbourne collection was largely posthumous, first through the selection of works from his personal collection in 1904, under the terms of his will, and then subsequently through his remarkable Bequest.

Most of the works listed above – largely English landscape paintings produced during Felton’s own lifetime – were from the collection left at his death. Poynter (2003/2008) provides a detailed and considered analysis of the works selected by Bernard Hall in 1904, most of them still in the collection. Few, it has to be admitted, were of notable quality, a point made with some asperity by Daryl Lindsay in his later history of the Bequest (1963). Ursula Hoff, however, in her short 1983 book on the Bequest, is more forgiving, noting that Felton seems to have kept with him a number of paintings that reminded him of the English countryside of his youth.

The bulk of Felton’s estate, amounting to just under £400,000, was left in trust to be administered by the Felton Bequests Committee, half of it to be directed towards charities, and the other half to be spent on the purchase of works of art for the NGV. This was clearly a huge sum by modern standards – Poynter (2003/2008, p.227), estimated that it would equate to “perhaps $35 million in 2000 values” – and through judicious investment it continued to grow well into the 20th century.

As a resource for the development of the NGV’s holdings beyond 1904, it was obviously crucially important, and the first purchases made on Bernard Hall’s advice in 1905 – especially Pissaro’s Boulevard Montmartre and two sculptures by Rodin (whom Hall visited while in France) – promised a remarkable transformation in both the character and quality of the collection. Eventually, that did occur, but only over some considerable time, and with various wrong turnings and setbacks. The long story of that process is not only beyond the scope of the present catalogue, but also completely superfluous, in light of John Poynter’s detailed account, told with considerable acumen and panache.

Finally, however, I must reiterate my view that Felton’s generosity should not be allowed to obscure proper recognition of what an important collection Melbourne had already assembled by 1904, a fact that I would suggest was clear to Felton himself when he drew up his will.

Clive Murray-White’s monumental marble bust of Felton, reproduced above (and in the header of each entry in this catalogue), was carved after the artist won a competition to produce a sculpture to commemorate the centenary of the Felton Bequest in 2004. As Poynter observed in the postlude he added to his book for the revised edition in 2008 (p.629), “this weighty and beautiful piece of marble achieved its dual purpose, of being at once a portrait and a monument to a great philanthropist.” I am very grateful to the sculptor for generously allowing me to reproduce the work in this catalogue.

For the von Guérard that Felton gave to Geelong in 1900, see Poynter (2003/2008), p.204 (citing earlier references), and https://www.geelonggallery.org.au/collection/explore-the-collection/eugene-von-gu-rard (accessed 17 July 2020), noting that the painting, previously owned by Robert Hoddle, was a smaller version of an 1862 canvas bought by Frederick Dalgety (and now in the NGV, presented through the Art Foundation of Victoria, 1989: see https://www.ngv.vic.gov.au/wp-content/uploads/2014/10/vG_Online_exploring.pdf)