This print was donated together with * Stocks after Maclise Wellington and Blücher {1878} Loc? [PR], its pair.

Maclise’s monumental mural paintings, completed in the 1860s, are in the Palace of Westminster, London. Impressions of the two engravings , issued by the Art Union in 1876, still appear occasionally on the contemporary art market (example reproduced here). 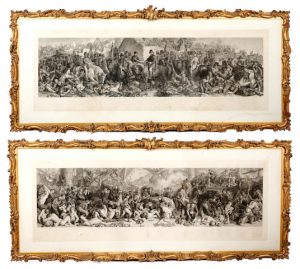 [photo: impressions of this print and the companion engraving by Stocks, as auctioned by Bonhams, Oxford, 2011]

For Maclise’s murals, see e.g. http://www.explore-parliament.net/nssMovies/01/0100/0100_.htm (Death of Nelson) and https://www.parliament.uk/worksofart/artwork/daniel-maclise/the-meeting-of-wellington-and-blucher-after-the-battle-of-waterloo/3246. For impressions of both engravings, with reproductions, see https://www.doeandhope.com/products/a-decorative-pair-of-very-large-gilt-framed-engravings-charles-w-sharpe-after-daniel-maclise-the-death-of-nelson-at-the-battle-of-trafalgar-published-1876-by-art-union-of-london-and-wellington-and-blucher-by-lumb-stocks (with details as above; size of each print given as 16.25 x 47.5 inches); see also https://www.bonhams.com/auctions/18987/lot/21/ (Oxford, Nov.2011)