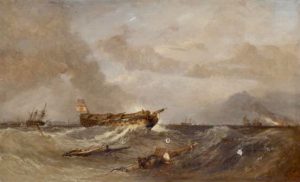 Christopher Wood (1995) observes that the Victorians had a seemingly insatiable taste for images of episodes from the Napoleonic wars. This is one of several pre-Felton paintings that support this claim.

One of several seascapes Stanfield painted on the subject of the famous sea battle of 1805, this canvas shows the aftermath, with the defeated Spanish ship San Ildefonso in the centre, H.M.S Defence to the left, and Cadiz and the Spanish coast visible in the right background.

Bought at the Centennial Exhibition in Melbourne in 1888, this work is said to exemplify Turner’s influence on Stanfield’s later marine paintings, which were praised by Ruskin in his Modern Painters; see also Turner (J.M.W.) Dunstanborough Castle {1888} NGV [PA]. But whereas Turner typically suggested drama or at least melancholy in his seascapes, this work seems essentially down-hearted.