Strange after Cortona Caesar putting away Pompeia {by 1868} NGV [PR] 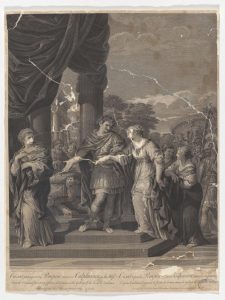 The inscriptions name the engraver and painter, and identify the source image as a painting in the Hotel de Toulouse.

See also Strange after Cortona Romulus and Remus {by 1868?} NGV [PR], from the same series.

This print is evidently in very poor condition.