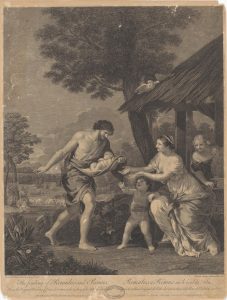 This print is from the same series as Strange after Cortona Caesar putting away Pompeia {by 1868?} NGV [PR]. The inscriptions identify painter, engraver and source.

Cortona’s painting Romulus and Remus given shelter by Faustulus is in the Louvre (dated to c.1643).

Listed in the NGV catalogue as by an unknown engraver after Cortona, and acquired by 1868 (?); with reproduction as shown here. For Cortona’s canvas, see e.g. http://www.wga.hu/frames-e.html?/html/c/cortona/4/07romulu.html (with reproduction)