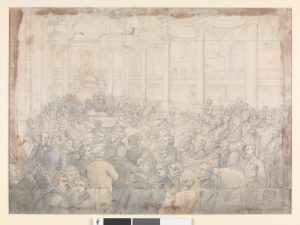 This drawing contains numerous portraits of the dignitaries assembled at this event, held at the Exhibition Buildings in 1856.

Strutt’s oil sketch of the interior – viewed from the same position, but without figures – was acquired by the SLV in 1991. Another related sketch by Strutt (1856) is held in the Victorian Parliamentary Library. However the artist, who returned to England in 1862 after 12 years in Australia, does not appear to have produced a major painting on the basis of these various studies.

For Fawkner’s patronage of Strutt, see linked entry on the donor.