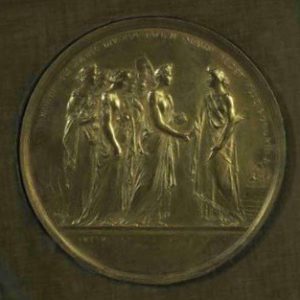 According to Museum Victoria, over 650 medallions were awarded at the Intercolonial Exhibition (held at the Public Library site), and the example listed in NGV 1880 may have been simply a common-or-garden bronze example; several such are held by Museum Victoria. However, the Museum collection also includes the gilt plaster work reproduced here, presumed to be the original model or pattern, and Summers researcher Jennie Maggs suggests that this may have been the work in the pre-Felton NGV.

Rather than following the tradition of medals produced in Britain (see e.g.* Wyon Melbourne Exhibition Medal 1854 {by 1880} Loc? [SC]), Summers and the local manufacturer (William Calvert) used an idiosyncratic “electroforming” technique involving the creation of a thin layer of copper mimicking a solid medallion (for details, refer Museum Victoria entry as cited below).

The design shows the personification of the state of Victoria, standing to the right, accepting the tribute of her 6 sisters (New Zealand and the other Australian states?!). The Latin inscription above reads FACIES NON OMNIBUS UNA NEC DIVERSA TAMEN QUALEM DECET ESSE SORORUM (“They all look different and yet alike: as sisters would”).