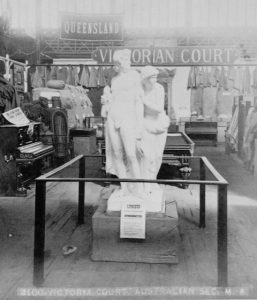 [photo at right: group as shown in Philadelphia, 1876 (Library of Congress, Washington)]

Summers researcher Jennie Maggs, to whom I am indebted for most of the information noted here, recently clarified the fact that this was actually the third of at least four variants of this group by Summers, none of which seems to be extant.

Summers sent this plaster version to the Australian section of the Philadelphia Centennial Exhibition (May-Nov.1876): see photo above; he then donated it to Melbourne, where it arrived from Philadelphia in May 1877. It was listed in the NGV’s 1880 catalogue as 5′ 4″ high. Maggs notes that it was de-accessioned in 1908, along with * Scurry Charles Summers {1884} Loc? [SC], as part of a cull of “surplus plaster statuary” offered to local Melbourne councils.

The earliest version of this statue (a “colossal group,” according to Summers’ biographer Margaret Thomas), was exhibited at the Royal Academy in 1875. The sculptor then made a second version for a wealthy patron in about 1876. The whereabouts of both these groups are unknown. 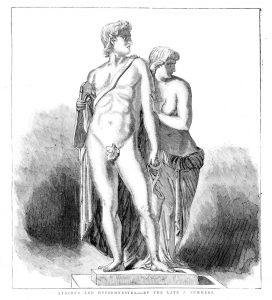 A fourth variant, in marble, at reduced scale, was shown at the Melbourne International Exhibition (Oct.1880-April 1881): see comparative photo reproduced here. Jennie Maggs has established that this group, produced in 1880, was purchased for the Garden Palace in Sydney, where it was destroyed in a fire in 1882.

Both the 1880 and 1894 NGV catalogues provide detailed plot summaries, citing Ovid and others. The version in NGV 1894 runs as follows: “Lynceus, one of the fifty sons of Aegyptus, King of Arabia, married Hypermnestra, one of the fifty daughters of Danaus, King of Argos. Danaus commanded his daughters to put their husbands to death on the night of their marriage. Hypermnestra alone spared her spouse, who, on the death of Danaus, succeeded to the throne of Argos.”

Jennie Maggs provides the following further details: Philadelphia International Exhibition, 1876, cat.no.400; stereo photo reproduced here (detail): see http://hdl.loc.gov/loc.pnp/cph.3c00632.    Notice of the arrival of the plaster group in Melbourne was published in The Australasian, 19 May 1877, p.19: see http://nla.gov.au/nla.news-article142999660. And for the dispersal of this and other plaster statues, see The Age, 30 May 1908, p.6: http://nla.gov.au/nla.news-article197337009 (as mentioned, I am most grateful to Ms Maggs for generously sharing her meticulous Summers research material with me, 2019-20)

For the 1880 variant, see Works of Art, Offical Catalogue, Melbourne International Exhibition, 1880-81, cat.no.522 (available via Trove or the SLV). The engraving shown above was published in the Illustrated Australian News, 6 November 1880, p.1 (Exhibition Supplement): see http://digital.slv.vic.gov.au/view/action/nmets.do?DOCCHOICE=3078699.xml&dvs=1567648724590~784&locale=en_AU&search_terms=&adjacency=&VIEWER_URL=/view/action/nmets.do?&DELIVERY_RULE_ID=4&divType=&usePid1=true&usePid2=true