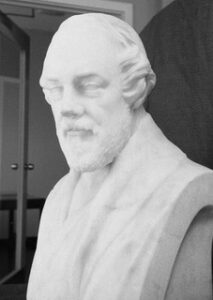 After his youthful travels (he explored with Sturt in 1829-30, when he was aged only about 20), Macleay became a successful New South Wales pastoralist, inheriting his father’s Alexander Macleay’s Brownlow Hill estate and, later, Elizabeth Bay House (built by his father in 1836). From 1859 until his death, he lived in England and then in the south of France, touring the Mediterranean in his steam yacht. Macleay’s ADB biographer describes him as a “tall sturdy man with red hair,” who had a range of scientific and artistic interests.

The busts of Sturt and Macleay were produced and donated together. In 1943, Sturt’s bust was transferred to the Library, during the cull of sculpture from the NGV, and Macleay’s bust is recorded as having been sold for £6 at the 1943 auction of NGV sculpture. However, it would appear that that sale was rescinded and this bust also transferred to the library in 1943 (as suggested by a note in the NGV stock-book).

Summers researcher Jennie Maggs (who has provided valuable advice for this entry) also notes that a second bust of Macleay attributed to Charles Summers is recorded in the collection of the Art Gallery of South Australia, with another Summers bust of Sturt.

Jennie Maggs (email correspondence Sept.2020, citing SLV librarian Gerard Hayes) has confirmed that although this work is not listed in the current SLV catalogue, it is in the collection (stored off site); the photograph reproduced here was taken by Hayes, c.2013