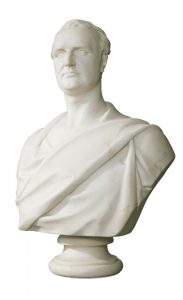 Barry (1813-80), the founder of the State Library of Victoria, the University of Melbourne and the Royal Melbourne Hospital, is shown here in appropriately heroic, alla antica style.

This work – one of the first acquisitions for the Melbourne collection – makes an interesting contrast with other portraits of the sitter produced during his lifetime, notably the earlier profile portrait by Summers’ pupil Margaret Thomas: Thomas Sir Redmond Barry 1856 {1881} SLV [SC]; and Woolner Sir Redmond Barry 1878 {1881} NGV [SC] (showing Barry in later life, only 2 years before his death).