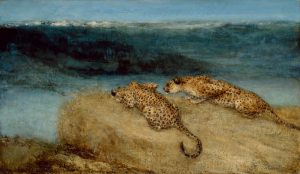 While this work correlates with the taste for animal subjects typical of the NGV’s early history, these creatures are unusually wild, by comparison with other domestic or barnyard works (see e.g. Tschaggeny Sheep in repose 1864 {1864} NGV [PA]). However, see also Rivière A Roman Holiday 1881 {1888} NGV [PA].

Herkomer, recommending the present work, described the artist as “our most original animal painter” (quoted in NGV 1894). The NGV’s prints and drawings collection also includes other animal studies by Swan acquired later, several of them donated by his widow in the year after his death.

For the artist, see Bénézit 13, p.567 (listing the present work); see also http://www.ngv.vic.gov.au/col/artist/1262, for works on paper by Swan acquired later for Melbourne