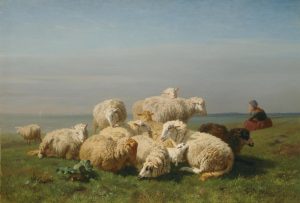 One of the initial selections made by Eastlake, this painting was praised in The Australasian in 1864 for its verisimilitude and portrait-like character (sic).

Observing that some contemporaries complained about the artist’s limited range, Ann Galbally (1992) comments wittily that he sometimes also portrayed cows and horses. Clearly, though, rustic pictures of this sort appealed to Melbourne audiences and those in charge of the Public Library during the pre-Felton era. In fact, some of them, notably the major NGV donor Sir William Clarke, made considerable fortunes in the period from breeding and running sheep.

The NGV’s online catalogue observes that Tschaggeny (whose brother Charles was also an animal painter, specialising in cattle) went to great pains to research his subjects, including dissection.

See Galbally & others, The First Collections (1992), pp.46-7 (cat.no.8; ill.), quoting from the review in The Australasian, 15 October 1864, but also noting that enthusiasm for Tschaggeny’s work later waned somewhat. The complaint that he painted nothing but sheep was made in the Art Journal in 1867 (cited by Galbally, p.61, n.44)