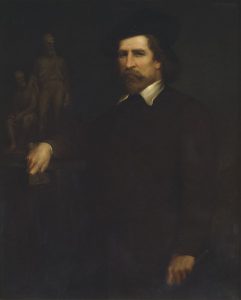 Summers, a key figure in the early years of the Melbourne gallery (refer linked artist entry and entries on individual sculptures), is shown here with a model of his Burke and Wills statue (1865), possibly the original model now held in the Warrnambool Gallery.

Thomas, who studied sculpture with Summers in Melbourne in the 1860s, showed this portrait in the Intercolonial Exhibition held in Melbourne in 1866. It was also exhibited at the Royal Academy in London in 1880, prior to being presented to the NGV. Thomas also published a laudatory biography of Summers: A Hero of the Workshop (1879).