These prints, which do not appear to be extant, formed part of Levey’s 1879 gift as recorded in the NGV’s acquisitions files. However, in the absence of identifying details, it is difficult to say anything more specific.

Nevertheless, this was an important acquisition. L’Art, published weekly in Paris from 1875-83, was a weighty periodical featuring a wealth of articles about contemporary artistic issues, lavishly illustrated with engravings, as well as large-scale tipped-in prints, mostly etchings. The latter, almost all by well-known French print-makers of the period (Braquemond, Jacquemart, Lebrun and others), reproduced works of art past and present, and the plates donated by Levey may have comprised a selection of these prints from the first 4-5 years of the publication.

The State Library of Victoria holds a complete run of L’Art in its original weekly format, which may explain why the individual plates donated by Levey were not retained. Most of the volumes currently in the SLV are stamped as accessioned in 1925, but two – volumes 10 and 11 (both published in 1877) – are inscribed by hand with the date Feb.1879, not long before Levey’s formal donation in August of that year: see now Levey Gift. 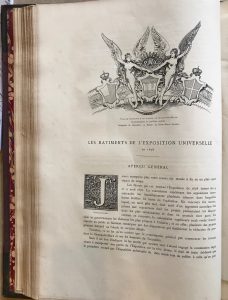 Volume 13 in the series (1878) is of particular interest, containing an extensive coverage of the grandiose Exposition Universelle held in Paris from May to November of that year, including a series of articles by Viollet-le-Duc on the Trocadero and the other pavilions constructed to house the exhibits (see comparative photo at right). It was at this exhibition that Levey, in Paris as part of the team responsible for Victoria’s stand-alone pavilion, purchased the prints that formed his subsequent NGV gift.

[photo: opening page of Viollet-le-Duc’s article on the architecture of the  1878 Paris Exposition, in L’Art vol.13 (SLV copy)]

For details of L’Art in its weekly format (1875-83), see SLV catalogue; the library also holds the remaining issues, which appeared monthly from 1884-94 and 1901-1907. A comparison of the tables of contents of prints published between 1875 and 1878, and the NGV’s current online catalogue, suggests that none of the plates donated by Levey is extant

For the 1878 Exposition Universelle, see e.g. https://en.wikipedia.org/wiki/Exposition_Universelle_(1878) (accessed 29 July 2019); the sequence of Viollet-le-Duc’s articles on the architecture of the exhibition begins with “Les Batiments de l’Exposition Universelle de 1878: Aperçu Général,” L’Art, T.13 (1878), pp.110ff. For further information on Levey’s role, see the linked entry on his 1879 gift