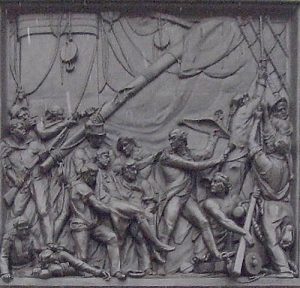 Carew’s panel, showing Nelson’s death at the Battle of Trafalgar in 1805, was the most famous of the four large bas-reliefs at the foot of Nelson’s Column (1830-43). The reliefs were cast from cannon captured in Nelson’s battles, and Carew’s was the first to be installed, in 1849.