Léopold II (reigned 1865-1909) is notorious for having founded the Congo Free State, now the Democratic Republic of the Congo, in the 1870s. He is said to have run the colony as his own private, highly profitable enterprise, exporting ivory and rubber, and authorizing the treatment of the local population with widespread and systematic brutality. Modern analysis suggests that the atrocities amounted to a “hidden holocaust.”

International condemnation came to a head in the early 20th century, following the publication of Joseph Conrad’s Heart of Darkness (1902), based on his experience of a visit to the Congo in 1890, and criticism from others including Conan Doyle and Mark Twain.

The king invested considerable quantities of the personal wealth he accumulated in the Congo into building projects in Belgium and (during his final decade), lavish demonstrations of affection for a young French woman, Caroline Lacroix.

Marie-Henriette, a Hapsburg princess, lived increasingly apart from her husband during the second half of his reign, and died in 1902, aged 66.

Louis Ghémar (1819-73), after working initially with Robert Severin – see * Warnots (?) after Ghémar & Severin Léopold I, roi des Belges 1856 {by 1865} Loc? [PR] – joined forces with his half-brother Léon Auverlaux, opening a studio in Brussels which continued to operate after his death, until 1894.

Several photographic portraits by Ghémar Frères of both Léopold II and his wife date from the later 1860s and 1870s (prints are held in the V&A and elsewhere). But the exact character of the pre-Felton works catalogued here (described in NGV 1894 as lithographs) seems uncertain. The pre-Felton collection also included a plaster bust of Léopold II, presented by the Commissioners for Belgium at the Melbourne International Exhibition, 1881. Given the history, the disappearance of both portraits can scarcely be regretted. 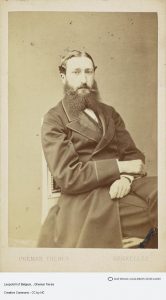 For Ghémar Frères, see e.g. https://commons.wikimedia.org/wiki/Creator:Ghémar_Frères.  For their photographs of the king and queen, see e.g. https://www.npg.org.uk/collections/search/portrait/mw186746/Leopold-II-King-of-the-Belgians?LinkID=mp54060&search=sas&sText=Leopold+II&OConly=true&role=sit&rNo=11 and https://commons.wikimedia.org/wiki/File:Marie_Henriette_Anne_de_Habsbourg-Lorraine,_1870.jpg. For the photo reproduced above, see https://www.nationalgalleries.org/art-and-artists/111927/leopold-ii-belgium