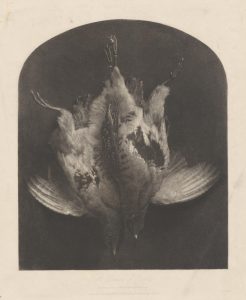 Lake Price, regarded as an important innovator in mid 19th-century photography, trained as an architect with Pugin (see Pugin Oxford {1877} NGV [WT]), and then took up watercolour painting, printmaking and photography.

It seems somewhat unclear whether this work should be catalogued as a photograph or a print, and whether it should be considered an original work or a reproduction. The inscription below the image runs: “A Brace of Birds / Engraved from a Photograph by Lake Price, / London. Published May 1857, by the Photo-galvano-graphic Comp’y, Holloway.”

In 1984, the Getty Museum acquired another impression, with medium and size as indicated above, and also a print of the original photograph, titled The First of September, and dated 1855; both are listed by the Getty as original works by Lake Price. Another impression of the present work, in the Museum of Fine Arts, Houston, is described as a “photoengraving” after the artist.