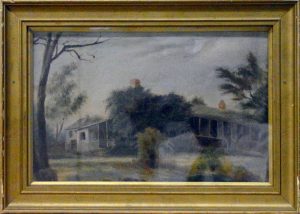 “La Trobe’s Cottage,” as it is known now, was built for Charles La Trobe at Jolimont, near the present Melbourne Cricket Ground, in 1839, using prefabricated materials imported from England. The building survives, relocated and reconstructed, in King’s Domain, Melbourne.

The SLV holds several old drawings and photographs of the original house. However, as SLV librarian Gerard Hayes advises (July 2019), the representation shown here is most likely to be the work donated in 1900 (the size and medium correlate).


For the building, see e.g. https://en.wikipedia.org/wiki/La_Trobe’s_Cottage (a detailed entry); refer also SLV catalogue for other early images of it