The details listed above appear in NGV 1865 and AR 1870-71, clearly describing this work as a bust “from the antique in the British Museum, in Parian” (for this medium, see * Bonham Carter Florence Nightingale {1880} Loc? [SC]), and identifying the donor as an MP and Alderman of London.

The work reproduced was obviously the marble bust purchased by Charles Townley in Naples in 1772, and said to be his favourite work (British Museum 1805,0703.79). Traditionally called Clytie, whose unrequited love for Apollo led to her transformation into a sunflower, the figure has also been identified as Antonia (36 BC – 37 AD), the daughter of Mark Anthony and the mother of Germanicus and the future Emperor Claudius. The British Museum date the bust to c.40-50 AD, while adding that it seems to have been reworked extensively in the 18th century.

William Taylor Copeland (1797-1868), besides being Lord Mayor of London (1835-6) and the Conservative member of parliament for Stoke-upon-Trent (1837-52 and 1857-65), was also, significantly, the owner of Copeland & Sons, the china and glass company founded by his father William Copeland and Josiah Spode in 1770: see now Copeland pottery [DA], noting various pre-Felton examples (some still in the NGV). 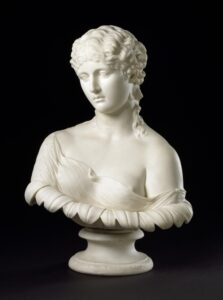 It seems logical, then, to suggest that the present bust was also a product of the Copeland factory, presumably similar to the example reproduced here, a Parian bust of Clytie in the V&A, manufactured by Copeland & Co. in 1855.

Melbourne’s bust may have been presented as early as 1863, when other “specimens of porcelain” are recorded as donated by Copeland: see “Donations” (1863).