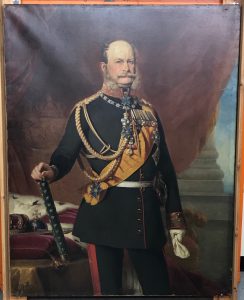 The artist responsible for the present portrait is not named, but the work appears to be closely comparable with several other known portraits of the Emperor, including one by German painter Gottlieb Biermann (1824-1908).

On his death in March 1888, Wilhelm I was succeeded as king and Emperor by his son: see * Rohrbach after Hellwig Frederick William of Prussia {by 1871?} Loc? [PR], who reigned for only 99 days before dying of cancer. He was succeeded in turn by his son Wilhelm II (1859-1941), a much more bellicose ruler who ended up leading Germany into World War I.

SLV (not currently catalogued); the ID photo shown here was taken by the author (July 2019)