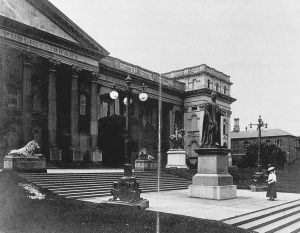 This photograph shows a partial view of the assemblage of statues in front of the Public Library immediately after the installation of Frémiet’s Joan of Arc (an early Felton Bequest purchase, hence not included in this catalogue). Also visible on the steps is Gilbert & Ball Redmond Barry 1887 {1887} SLV [SC].

The photo was sent by NGV Director Bernard Hall to Auguste Rodin, in connection with a proposal that the famous French sculptor produce one or
two monumental statues of lions to replace * Unknown (Italian 19C?) Lions (2) {1862} Lost [SC] (refer linked entry for further details, and another photo dating from 1918). Unfortunately, the Rodin project fell through, for lack of funds.

For Jaynie Anderson’s detailed account of the negotiations between Hall and Rodin, including a reproduction of this photo, see the entry noted above on the two Italian lions formerly outside the Library. Frémiet’s Joan of Arc is a replica of his 1874 statue in Paris: see now Ted Gott, “An iron maiden for Melbourne: the history and context of Emmanuel Frémiet’s 1906 cast of Jeanne d’Arc,” The La Trobe Journal, no.81 (Autumn 2008), pp.53-68, available online