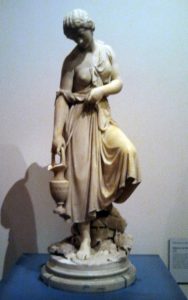 In its somewhat alluring treatment of the Old Testament subject, this statuette typifies the period, and is comparable with other later 19th-century examples, such as the larger-scale statues by C.F. Summers in the Ballarat Botanical Gardens, which also included a Rebekah.

The SLV catalogue describes the present work as “possibly a product of the flourishing Italian sculpture studios of the 19th century, which particularly served the tourist market.”