Unfortunately, this print, listed in the NGV’s Annual Report for 1878, no longer seems to be in the Melbourne collection, as it points to a rich and interesting vein of colonial Victorian history.

Francis Thomas Cusack Russell (1823-76) arrived in Australia from Ireland in 1847 and was ordained Deacon by Church of England Bishop Broughton in Sydney. After criticizing Broughton in 1848 for supposed doctrinal laxity, he was refused ordination to the priesthood, and promptly decamped to Melbourne.

In 1850, Bishop Charles Perry transferred Russell to country Victoria, where he spent the next 25 years as the itinerant “Apostle of the Western District,” based at the so-called “Parsonage on the Wannon,” by the Wannon River near Coleraine. In 1866, he was finally ordained priest by Perry. 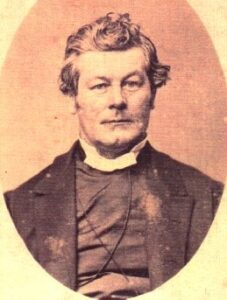 He died in 1876 on the return voyage to Australia following a trip to Ireland. He is remembered in a fine group of Ferguson and Urie stained glass windows installed in 1877 at Holy Trinity, Coleraine, whose foundation stone was laid by Russell in 1865. This was one of several churches he established in the area, at Casterton and elsewhere.

The donor of this print was evidently Samuel Pratt Winter (1816-78), an Anglo-Irish Protestant who founded Murndal station at Tahara in 1837, and acted as Russell’s patron.

For Murndal, see also https://vhd.heritagecouncil.vic.gov.au/places/23075 (database entry on Murndal Homestead, Tahara); https://www.deutscherandhackett.com/auction/10-fine-art-auction/lot/murndal-early-days-1860 (a fine painting of the property by Thomas Clark, auctioned in Melbourne on 26 August 2009; with an informative entry by David Thomas); and https://www.gardenhistorysociety.org.au/wp-content/uploads/2018/12/Murndal.pdf (by Helen Doyle) [all websites accessed 18 July 2020]