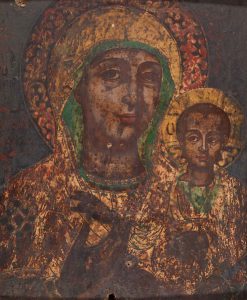 This icon is clearly documented in the NGV stock-book as donated to the Melbourne collection in 1868.

An added note in the stock-book indicates that it was auctioned in 1948 (when Daryl Lindsay’s purge of older works in the collection was still going strong), but it was evidently granted a stay of execution, despite its obviously mediocre condition.

Several other late Byzantine and Russian icons entered the NGV after 1905, especially, interestingly enough, during Daryl Lindsay’s period as director during the 1940s-50s.

For the other late Byzantine and Russian icons in the NGV collection, see Hoff (1995), pp.34-40, and the gallery’s current online catalogue