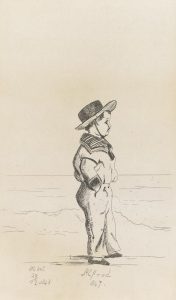 This image of Victoria and Albert’s second son (1844-1900) in a sailor suit, looking out to sea, is prophetic: he spent most of his life in the navy, and was appointed admiral of the fleet in 1893.

For Charles Summers’ later marble bust of Prince Alfred, see * Summers (Charles): The Duke of Edinburgh {1873} Loc? [SC], including discussion of the dramatic events surrounding
Alfred’s official visit to Australia twenty years after this print was made.