Queen Victoria’s second son Alfred (1844-1900) was made Duke of Edinburgh in 1866, and visited Australia shortly afterwards (1867-8). While in Sydney in March 1868, he was shot and wounded by Henry James O’Farrell, who was subsequently hanged, despite the Duke’s recommendation that O’Farrell’s fate be referred to the Queen for her clemency. During Prince Alfred’s return visit to Australia in 1869, hospitals in both Sydney and Melbourne were founded in his name, to commemorate his recovery.

Gerard Vaughan suggests that this bust was probably the one submitted by Summers to the Royal Academy in 1873. It fetched a mere £5/10 at the 1943 auction of NGV sculpture.

For an etching of Alfred as a young boy, by his mother, see Victoria [Queen] Prince Alfred 1848 {1893} NGV [ET]; and see also artist entry on Nicholas Chevalier.

Another marble bust of the Duke, by Summers’ son C.F.Summers, dated to c.1884, is held in the City of Melbourne Art & Heritage Collection: see photo below. 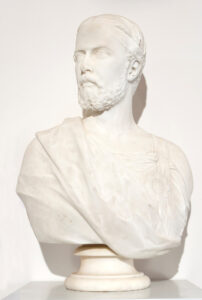 See in particular Vaughan “Queen Empress” (2013), including the details noted above. For the details of Prince Alfred’s visits to Australia, see http://adb.anu.edu.au/biography/edinburgh-duke-of-3467 (biography by H.J.Gibbney; first published in ADB vol.4, 1972)

For the C.F.Summers bust, see http://citycollection.melbourne.vic.gov.au/h-r-h-prince-alfred-the-duke-of-edinburgh/ (no.1091151), with reproduction as shown here