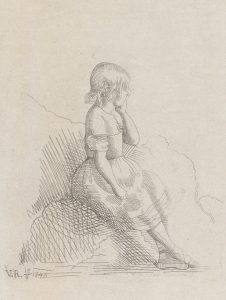 This is the earliest of six etchings by the British monarch, donated by her in 1893, together with a further six by her husband Albert (see separate artist entries for further details).

For the sitter, see e.g. https://en.wikipedia.org/wiki/Princess_Adelheid_of_Hohenlohe-Langenburg. In 1852, a suggestion that she marry the 44-year-old Napoleon III, soon after he was declared Emperor of France, was effectively vetoed by Victoria and Albert, apparently mainly on political grounds. Four years later, aged 21, she married Frederick VIII, Duke of Schleswig-Holstein, with whom she had seven children, retiring to Dresden after his death in 1880