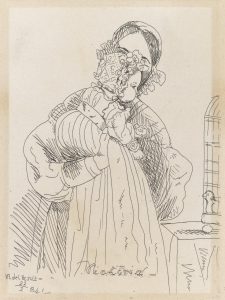 Queen Victoria’s first child was born on 21 November 1840, baptized Victoria on 10 February 1841, and named Princess Royal (the title given to the eldest daughter of the reigning monarch ever since Charles I bestowed it on Princess Mary in 1642).

This print is dated on the plate, 22 February 1841, and inscribed “VR del & sclt,” indicating that the queen both drew and etched the image. It shows signs of growing artistic skill (compare Victoria [Queen]: Princess Adelheid 1840 {1893} NGV [ET]), although the child’s head rather oddly obscures the nurse’s.

For other childhood images of Princess Victoria, see Victoria [Queen]: Victoria, the Princess Royal, seated 1841 {1893} NGV [ET], etc. In 1858, she married Prince Frederick William of Prussia (1831-88), who became German Emperor in 1888, only months before his death. As ‘The Empress Frederick,’ she lived on until 1901, and was known for taking a far more liberal line than her oldest child, Kaiser Wilhelm II, who later led Germany into World War I.