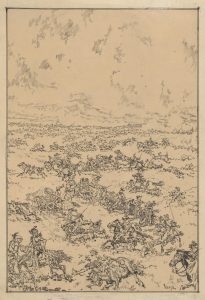 This work is identified in the 1905 NGV catalogue as an illustration for Michelet’s History of France, published in 1876. The battle in question occurred in 1557, when French forces were defeated by a Hapsburg coalition. The bloody conflict is said to have left the Spanish King Phillip II with “a permanent distaste for war.”

Vierge, born in Spain, moved to Paris in 1867 and became a key contributor to French illustration, making lively drawings for Michelet’s History, Victor Hugo’s Les Miserables (1882) and many other publications. Further characteristic illustrations, to Francisco de Quevedo’s life of the fictional swindler Don Pablo de Segovia (written in c.1604; Vierge’s edition first published 1882), were acquired for the NGV through the Felton Bequest in 1905.

Shortly before completing the Quevedo illustrations, Vierge, aged 30, suffered a stroke that left him paralysed on the right side; he later taught himself to draw with his left hand, completed Don Pablo (2nd edition, 1892), and then produced an extensive set of illustrations to Cervantes’ Don Quixote.

Listed in the NGV catalogue as Medieval battle scene. For the artist, see Bénézit 14, p.294 (listing the present work); also useful are http://en.wikipedia.org/wiki/Daniel_Vierge (suggesting that Vierge’s Michelet illustrations are his masterpiece); and http://www.artandinfluence.com/2010/11/daniel-urrabieta-vierge-1851-1904.html. See also http://www.ngv.vic.gov.au/explore/collection/artist/4709/ (for the other NGV works by Vierge)

For the Battle of St Quentin (in Picardy), including the quote about Phillip II, from Spencer Tucker, A Global Chronology of Conflict (2010), see https://en.wikipedia.org/wiki/Battle_of_St._Quentin_(1557) (accessed 17 Sept.2019)