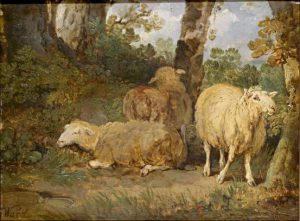 Yet another pre-Felton image of sheep or cattle, this small panel was bought from the local sale of works formerly owned by Melbourne solicitor William Lynch (from whose collection several works were also purchased for Alfred Felton, shortly before the latter’s death).

This work is undated, but Ursula Hoff (1995) notes that a comparable painting in the Paul Mellon Collection dates from the late 1790s. Ward, admitted to the Royal Academy in 1811, was known both for his animal subjects and other works (portraits, landscapes).