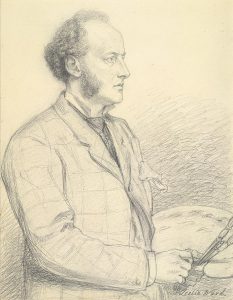 Millais (1829-96), one of the foundation members of the Pre-Raphaelite Brotherhood, is said to have brought Ward’s caricatures to the attention of Vanity Fair in the early 1870s.

After 1905, the NGV acquired a number of Millais’s works, the most significant of which is the 1855 painting The Rescue (Felton Bequest, 1924).

For the suggestion that Millais recommended Ward to Vanity Fair, see http://www.britannica.com/EBchecked/topic/635779/Sir-Leslie-Ward. For Millais’ The Rescue, see http://www.ngv.vic.gov.au/explore/collection/work/4185/